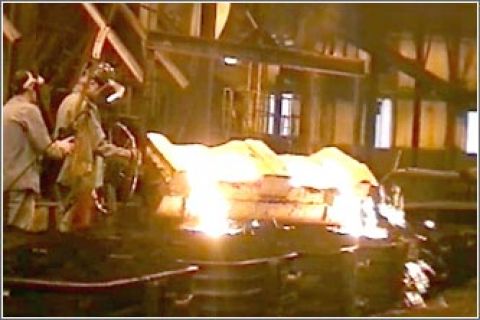 I asked Sissy about the floor in the old building because she had worked there when they used to make socks.

I had never seen such a floor. It went on and on in all directions and looked, at first, like black bricks laid on their narrow sides. But when I looked closer, I saw that each “brick” had rings, such as the end of a two-by-four has rings.

“Isn’t that something?” Sissy said. “It’s more than a hundred years old. They cut the wood into brick-size pieces and set them in place. Wood was a good flooring material for under the weaving machines because we had to oil those machines constantly and the oil ran down onto the floor. The wood soaked it right up. If they had made the floor of brick, we would have been slipping all day.”

The factory was in Eastern Pennsylvania, in a town that looks like a postcard of what America once was. They made Gold Toe socks in that factory, and I’ve worn them over the years. Good socks, and the company stood behind them.

“Seniors would send us these old socks they had worn for more than ten years,” Sissy said. “There would be a small hole here or there and the person writing would complain that the socks didn’t last.” Sissy smiled, remembering that. “No good after ten years of wearing. Imagine that! We replaced them for free, of course.”

Gold Toe employed 500 people from the town and ran three shifts right up until they slammed the doors for good right after September 11, 2001. You had to figure they were doing okay because they were running those mills around the clock, and Gold Toe makes good socks that lots of Americans like to wear. But there was more money to be made by moving the work to Mexico and China where people are willing to do the work for next to nothing, so that’s what Gold Toe did, and 500 people in a small Pennsylvania town looked at each other and wondered what to do next.

First, September 11. And then this.

Which made me remember a story I had once heard.

Joseph Heller, who wrote the novel, Catch 22, was at a party being thrown by a billionaire in the Hamptons out on Long Island. Heller was hanging out with the author Kurt Vonnegut, who wrote, Slaughterhouse-Five.

Vonnegut says to Heller, “Joe, how does it make you feel knowing this guy probably made more money yesterday than Catch 22 has made since you wrote it.”

Heller shrugged and said, “That’s okay. I’ve got something this guy will never have.”

Many American companies don’t understand that. They fire people, move, and leave behind lots of Americans who can no longer afford to buy things, such as socks.

Sissy picked up the pieces and went back to school to finish her degree in Management. A friend, who was caretaking the old building with the wonderful wooden floor, called her one day to say that a boiler company was moving an assembly plant into the building because they had outgrown their other building. She should apply for a job there.

Sissy did, and the people at Peerless Boiler recognized her talent. That’s why, on a day last September when it was raining as though the world was about to end, I was standing by her desk and she was telling me about the work. She has this quiet, calm wisdom in her eyes as she speaks, and I wish you could see those eyes.

Peerless Boilers came to Boyertown a long time ago and stayed. Theirs is an American story and I was there because I wanted to see the foundry. I hadn’t been in an American foundry for more than 20 years. There are so few left. I needed to go and see the work because of the times in which we find ourselves.

A foundry is a dirty, loud, and primal place. You will see things there that will make your job seem easier, no matter what you do for a living. A foundry will make you appreciate the work, and the unseen American people who still do the work. A cast-iron boiler does not come from a supply house. It comes from a foundry.

The foundry men do the same tasks over and over and over, day in and day out, and when they look at you there’s a challenge in their eyes. You can’t do what they do. You stand there in your nice clothes and you just know you can’t do this work. Someone has to do it, but it is not you. They look at you hard, and you both know that.

You move on and watch and you begin to see what goes into the making of a cast-iron boiler. It doesn’t come from a catalog or from a truck.

These men with the challenge in their eyes begin at dawn and quit by two in the afternoon because of the incredible heat of the place. They have cables for muscles and they lean into impossibly heavy iron molds swinging from chain hoists and move them into place. It’s a gritty, violent ballet. Over and over again, they move the iron and you can’t truly understand boilers until you absorb this heat, and breathe this foul air, and feel the noise of American industry pounding into you.

We can’t do what they do, and as you watch them do their work, you’ll know that what I’m saying is true.

Other men over there, serious, careful men, swing a bucket of molten iron that hangs from a hoist. They position it by eye over the molds and the heat is like a punch in the chest. They check the temperature of the iron one last time before tipping their welding masks. Then they pour 2,500-degree liquid iron, into two holes the size of softballs, without missing. Flames explode from the relief holes as the oil in the sand casting bursts into flame. The men look at the mold and at each other, communicating without a word, and then they move on to the next one. Each knows what the other is going to do. Each depends on the other for his life. It’s like watching soldiers.

The iron boiler sections take hours and hours to cool, and even when out of the mold and stacked for a very long time, they still feel like steam radiators on a frigid day. I stood close, but not too close.

They grind and machine these sections, which is hard, dirty work, and they press these sections together, and who knows what they’re thinking as they do this day in and day out. They are American workers, building boilers that will warm American families. You may touch their work in the course of your work but you will not think of them. You should think of them, though, because we are a family, and that’s what I realized that day.

We are a family.

This entry was posted on Thursday, November 3rd, 2016 at 12:03 PM and is filed under Fact Sheet. You can follow any responses to this entry through the RSS 2.0 feed. Both comments and pings are currently closed.

Since 1950 our family owned business has been providing the highest quality fuels and service.
Preview Changes (opens in a new window)